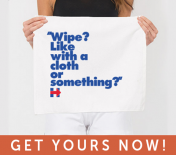 Earlier this year, Fiorina failed to clinch the Republican nomination, and it looks like she's chasing after Clinton now. According to Newsmax, Fiorina has taken to her Facebook page to offer white dish towels that feature the phrase, "Wipe? Like with a cloth or something?" Oddly enough, the towels also feature Clinton's logo.

The towels are selling for $9 each through the CarlyForAmerica.com online store. It can be assumed that any profits from the towels will be directed to her campaign debts. Fiorina also provides potential purchasers the option of making an additional contribution to "help us keep exposing the truth about Hillary."

The tagline for the towel's online advertisement reads, "The FBI might've believed Hillary when she claimed she wiped her email server 'with a cloth or something.' But the American people aren't falling for her lies."

The political promotions really are heating up for the 2016 presidential election, and no candidate is safe. Just look at these anti-Trump products and these anti-Hillary products.

What do you think about Carly Fiorina's anti-Hillary dish towels? Let us know in the comments section.

Manchester City Partners With Heineken for 'Plastics' Statue Outside Stadium