A couple years ago, we covered a story involving a Kentucky printing shop called Hands On Originals that refused to print a gay pride T-shirt for the 5th annual Lexington Gay Pride Festival. 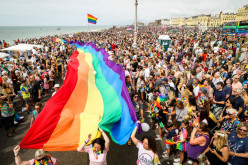 In 2012, Blaine Adamson, the co-owner and manager of the shop, objected to the messaging on the T-shirts, and the Lexington Fayette Urban County Human Rights Commission said his decision not to print the shirts violated the Lexington County law banning sexual orientation discrimination in public places. But, a Kentucky appeals court ruled that Adamson's actions did not violate the law.

Now, according to Newsweek, the case is going to the Kentucky Supreme Court.

"I will work with any person, no matter who they are, and no matter what their belief systems are," Adamson said in a press conference Friday. "But when I'm presented with a message that conflicts with my faith, that's just something I cannot print, that's the line for me. I don't walk into my business every morning and leave my faith at the door."

Adamson is being represented by the Alliance Defending Freedom (ADF), a conservative legal group.

"The evidence is clear that Hands On Originals serves everyone—and just doesn't print certain messages," ADF counsel Joe Campbell told the justices on Friday. "The First Amendment in this case cuts in Hands On Originals' favor—[it] ensures that the government can't use a law to force someone to print or convey a message that they find objectionable."

Justice Michelle Keller proposed to the court the possibility that Adamson's argument could have been used to defend workplace and housing discrimination against Catholics in the late 19th century.

"That would still be okay under this analysis, wouldn't it? I mean that kind of overt discrimination between faiths?" she asked. "As long as it is tied to the production of printed material."

While this is just one case, legal experts predict it could have a huge impact on anti-discrimination ordinances nationwide.

"That's why we have a public accommodations ordinance: to stop businesses from allowing certain populations to be discriminated against and not enjoy the goods and services that are being offered by that business," said commission chair Ray Sexton. "This is where we were in the '60s—'Well, we don't believe you should do business with African Americans.' Sexual orientation and gender identity are the civil rights issue of our time."

Newsweek pointed out that at least a dozen cities in Kentucky include sexual orientation and gender identify in their anti-discrimination laws, but the actual state does not.

We'll see how the Kentucky Supreme Court rules on this case, since its impact on branded goods is certainly significant. It calls into question whose First Amendment rights take the utmost importance: the customer or the printer.