Case Regarding Political Apparel at Polls Goes to Supreme Court 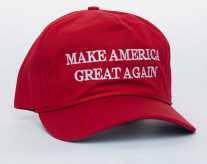 The Supreme Court is listening to a case regarding whether or not political promos should be banned at polling places.

Promotional items and apparel have always played a role in political campaigns, though last year’s presidential election may have taken the cake with its surplus of big, red hats and “I’m With Her” stickers. Regardless of your political stance, I think we can all agree on one fact: Voters are passionate about supporting their favored political candidates. From buttons to bumper stickers, hats to hoodies, it’s no secret that political campaigns often rely upon an array of promotional items to reach their intended voter base. It’s an American tradition rooted in free speech—that is, to a certain extent. While citizens are free to purchase and wear political apparel, there are some states, like Minnesota, which ban voters from wearing any apparel items that bear political insignias or slogans.

These laws don’t sit well with some voters who see it as their First Amendment right to wear whatever political messages they like, wherever they like. Just yesterday, the U.S. Supreme Court agreed to take on a case from Minnesota that deals with this issue. Andy Cilek, a Minnesota voter and executive director of the Minnesota Voters Alliance, brought the case against the state of Minnesota after being momentarily blocked from voting. The reason? He was wearing a "Don't Tread on Me" T-shirt at a polling station.

Whichever way this case goes, the law’s upholding or defeat could have major implications for the role of promotional items and apparel in political campaigns. While it’s tough to speculate, if the law is upheld, other states could see it as an opportunity to ban political apparel from polling stations. If it is struck down, voters could see it as an empowering decision that encourages them to support their candidates however they desire, in turn providing a boost to the promotional marketing industry.

It is important to note that other countries have decided to ban promotional apparel from elections entirely. A ban on political apparel at polling stations could set a precedent for bans on promotional items bearing political messages in other spaces. Not only could this be a major blow to free speech, but it could also affect promotional marketers who depend on political campaigns for business.

If one thing’s certain, it’s that Americans don’t particularly like being told what they can do, say or wear. This attitude certainly extends to voters who see it as their right to support candidates not only with the ballot, but also with their wardrobe.