Chance the Rapper Not Taking Risks in Battle Against Merchandise Bootleggers 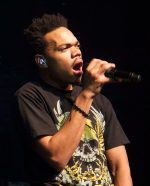 Set to launch his 43-date Be Encouraged tour today in San Diego, Chance the Rapper is leaving nothing to chance regarding merchandise sales. The Grammy Award winner, owing to his independent status, relied on his home state of Illinois recently, filing a lawsuit that would let him seek “injunctive and monetary relief” against parties peddling goods outside his shows.

The 24-year-old, whose marketing acumen could rival his musical talent as an industry rarity, had his legal team issue a similar document in September over his Magnificent Coloring World Tour. Like the predecessor, the new lawsuit finds the star, born Chancelor Bennett, looking to protect the integrity of the items that compliment his creative output. His eponymous limited liability company oversees the sale of numerous apparel items, making its alliance with CTR Touring Inc. a measured means to keep bootleggers from hawking falsely identified beanies, bottoms, caps, hats, headwear, hooded and non-hooded sweatshirts, pants, shirts, socks, T-shirts and tops.

“Artist has achieved wide renown during his career in the music industry, as well as through his humanitarian and charitable efforts in his hometown of Chicago,” his lawyers said in the lawsuit, which the U.S. District Court of Northern Illinois received April 19.

That esteem has netted Bennett the aforementioned prizes for Best New Artist, Best Rap Album and Best Rap Performance, scored him placement on TIME’s list of the 100 Most Influential People in the World and will see him achieving headliner status at August’s Windy City-situated Lollapalooza. The legal move by the emerging performer is the second-such blow to those looking to make quick and crooked bucks off concertgoers and looks to ensure that his journeys, which will take him to numerous states and Canada, will see the proper exchange of money for merchandise. Minus a label, Chance obviously needs to procure every penny possible to continue to work on his craft, thus making his preemptive lawsuit a suitable I-told-you-not-to-mess-with-me step.