Chance the Snapper, Chicago’s Favorite Alligator, Gets His Own Coloring Book (With Help From Local Shirt Company)

As half the country deals with dipping temperatures, it is easy for us to recall the carefree nature of summer. One of the highlights of the season came when we covered the bobbleheads that alligator Chance the Snapper and rescuer Frank Robb received for their unlikely convergence at Chicago’s Humboldt Park lagoon. Fast-forward almost four months, and the duo has again joined the news cycle thanks to a coloring book that chronicles the reptile’s interesting existence.

Chance, the alligator who took the city by storm this summer, is the star of a coloring book created in part by Frank Robb, the man who caught the snapper.

USA Today notes that Robb had long entertained the idea of writing a book, and this venture is helping him defy the mindset, bred in the movie business by W.C. Fields, that people should never work with animals. The alligator expert is not interacting directly with Chance the Snapper, of course, as those who took interest in the creature’s well-being will be pleased to learn that while Robb is in Chicago, Chance is residing in Florida. Instead, Robb is further immortalizing the fellow celebrity through a partnership with a Chicago T-shirt business and illustrator Ben Clark to give us “The Adventures of Chicago Chance and Frank Robb.” 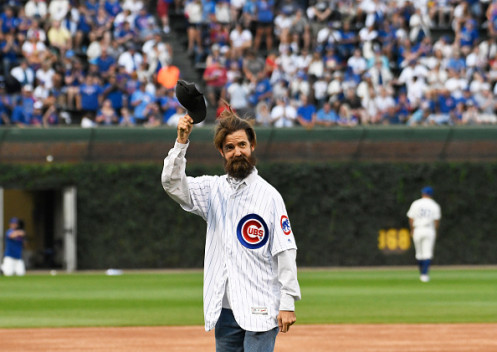 Chance the Snapper's rescuer, Frank Robb, threw out the ceremonial first pitch before the July 16 game between the Chicago Cubs and the Cincinnati Reds at Wrigley Field. | Credit: Getty Images by David Banks

While we wonder why the name Chance the Snapper did not make the title (maybe trademark issues relating to his namesake, Chance the Rapper), we are going to halt our critiques there, as the overall concept is firmly in the feel-good category. Our double endearment stems from the text’s handling of the action from Chance’s point of view and the donation of some of the proceeds to two charities. That second factor continues the altruistic mentality that commenced courtesy of the dual bobblehead of Chance the Snapper and Robb created by the National Bobblehead Hall of Fame and Museum.

This coloring book makes us enthused not only because we think it would be a great tale for children to learn while being creative, but also because it extends the shelf life of one of our favorite recent micro-moments. It also gives a local T-shirt company, Obvious Shirts, a shot at receiving an unexpected—yet unexplained—plug, something that we will always commend in the promo world.

As the holiday season makes its try-slowing-me-down march into the consumer world, anyone who is chomping at the bit for Chance the Snapper to gain additional promotional glory seems set to watch that happen one color selection at a time (and maybe via apparel options).

Alligator Farm in Florida Files Application to Register CHANCE THE SNAPPER as a Trademark for Clothing, Live Performances by an Alligator. Does CHANCE THE SNAPPER remind you of anyone? https://t.co/T0LyDiG1sd pic.twitter.com/nTtRoX1YTq