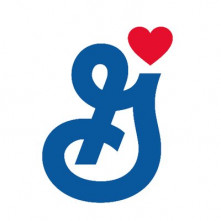 Thanks to my attending a Catholic elementary school and to being the epitome of a morning person, I, quite early in life, became a devotee of cursive writing and breakfast cereal. Fully committed to acquiring geek status as a first-grader, I even developed a preference for scripting the letters that comprised my name, but I also enjoyed a few outliers, notably capital F, G and R. (Yes, I did have friends and other interests!) The middle member of that group regularly met my eyes at home as I polished off bowls of Cheerios, Cinnamon Toast Crunch and Lucky Charms, all products issued by General Mills. Pushing 39, I still appreciate the company’s Making Food People Love slogan, which it is intensifying by adding a heart to its capital G-bearing logo.

The Golden Valley, Minnesota-headquartered entity has issued six signifiers since 1928 and took to its blog yesterday to tout the newest attention grabber. While yours truly and other end-users primarily know the manufacturer and marketer as a cereal seller, its 2017 Annual Report shows that snacks lead the way as its chief offering. But no matter the numbers, General Mills, despite a dip in sales, is always among the winners when observers and consumers separate the wheat from the chaff.

For its first logo, General Mills chose a very nondescript identifier to help it peddle numerous brands. (Image via blog.generalmills.com)

Brands must always ponder and subsequently implement ideas that not only reflect knowledge of industry trends but also look to strengthen customer loyalty. While its five predecessors, issued in 1928, 1949, 1956, 1963 and 2001, respectively, appealed to the never-waning desire to present a visually appealing identifier, one could argue that they lacked any customer-appreciation feel. That is not to say that any of the quintet of logos needed that element, but, given the affection behind the aforementioned slogan, any graphic attempt to acknowledge the connection between the company and the audience not only supports the saying’s sincerity but also reminds end-users that their commitment is going to compel General Mills to work even harder.

Continuing to “exemplify strength, longevity and trust,” the North Star State enterprise proudly proclaims that its “Big G” will now also represent “love.” With the holiday season unfolding in earnest and Christmas vacations and winter breaks on the horizon, companies that market foods that symbolize simplicity and camaraderie figure to do well as 2017 prepares to hand over the reigns to 2018, and General Mills is certainly among the primary providers of such products. With the addition of the heart to its logo, can it come to bowl over the competition for the foreseeable future?