We haven't really made too much of an effort to hide our Eagles pride here at Promo Marketing. (And we shouldn't have to hide it. We've waited a long time for this!) Others, especially our neighbors a few hours up I-95, aren't so excited about the Eagles' historic win.

Barry Lipsett, president of Sharon, Massachusetts-based Charles River, is one of those avid Patriots fans who was not too happy about the game's result. But, to his credit, he owned up to some pre-game wagers with Eagles (or anti-Patriots) fans, which required him to wear an Eagles shirt and eat Philadelphia's favorite food—cheesesteaks.

"Barry is an avid Patriots fan, and loves to have fun with his longtime customers," said Tracy Lehnen of Charles River. "So, in the spirit of friendly competition, he wagered a few bets with some customers who happen to be big Eagles fans. The end result was not good for Barry and the Patriots, but he happily paid off his bets and congratulated his Philly fans and longtime customers. The bets ranged from sending Eagles sweatshirts, fresh New England clams and our favorite, eating a Philly cheesesteak while sporting an Eagles T-shirt." 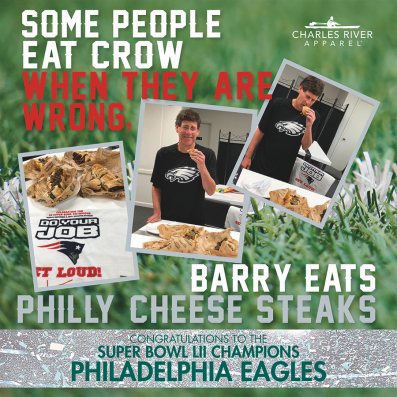 It wasn't the first time he's faced off against the Eagles in a wager. Remember (and we can never forget) that the Eagles suffered a close loss to the Pats in 2005? That earned Lipsett a Tom Brady shirt from a colleague in the industry.

This year, in addition to his cheesesteak "punishment," he owes friends like Fred Snyder from Geiger some Eagles gear.

He's not sure how he's going to transport those fresh New England clams, but he could partake in the cheesesteak punishment fairly easily.

"We have about 13 reps around the country, direct reps," he said. "And Josh Miller, he's in the Philly area. That was him. I had to eat the cheesesteak, wear the Eagles shirt. What we did, actually, is we took one of our Charles River T-shirts and pasted an Eagles logo on it. That way I could take it off when I was done."

For a company right down the street from Gillette Stadium, similarly to how we could hop right on the Broad Street line and be at the Linc in about 15 minutes, it's clear they really care about their Pats. So, hats off to Barry for holding up his end of the bargain, even if Tom Brady couldn't hold up his end of a receiving play. (Had to do it.)

(Editor's note: I may have been drawn into an informal rematch with him should the Pats and the Eagles have a rematch down the road.)