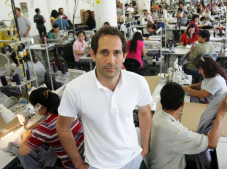 Dov Charney told Bloomberg that he believes American Apparel's failure is because of his absence. (Image via Twitter)

Dov Charney may not be doing a victory dance (at least not in public), but there certainly is an "I told you so" vibe in the air, following American Apparel—the company he founded that ousted him—declaring bankruptcy for the second time in as many years and announcing the probable sale to Gildan Activewar.

In an interview with Bloomberg, Charney attributed the company's failure to his absence.

"This company can't survive without my leadership," Charney said. "They didn't know how to run it. They took a company that could have lasted a century and crashed it into a wall."

As it stands now, Gildan Activewear will purchase the company's intellectual property for $66 million. This will allow it to sell American Apparel's basic items, like T-shirts, to screen printers and promotional products companies. This doesn't, however, include American Apparel's storefront locations. So, if American Apparel maintains its consumer-focused business, another buyer would have to snatch up the retail assets.

"At what point do they say we made a colossal mistake and destroyed the largest U.S. apparel company?" Charney said to Bloomberg. "The lesson is there has to be some respect for entrepreneurship and management. They didn't respect my management team and creative team. We built an extraordinary business."

The company's creative aesthetic was one of the major points of the branding shift under Schneider. The company wanted to steer away from Charney's sexualized imagery and revealing clothing in favor of more G-rated advertising and modest, basic apparel.

Charney, meanwhile, has been making rumblings about a new apparel startup, That's Los Angeles by Dov Charney. In previous interviews, Charney has made it clear that he's stood by what he did at American Apparel, and that's even more clear now. And the numbers don't lie. American Apparel was stronger under Charney's leadership.

So, while American Apparel will still be major in the wholesale world, it will be interesting to see how Charney's new brand fares in a retail market without his former company as prime competition.