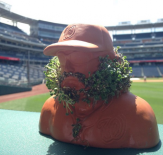 In baseball, "going yard" means hitting a home run. But now, it looks like the promotional powers of professional sports are "going yard" in a literal sense. We previously wrote an article about how more and more baseball teams are using garden gnomes as promotional giveaways. Now, continuing that garden theme, we're noticing that a lot of professional sports teams are using Chia Pets as promotions.

A lot of teams are using the Chia Pets to celebrate particularly hairy players, like those with long hair or beards (or both). For example, last year, the Washington Nationals gave out a Chia Pet modeled after hairy outfielder Jayson Werth. According to The Washington Post, the Nationals will do the same this year for another bearded outfielder, Bryce Harper. (We're not sure if end-users can perfectly manicure their Chia Pets like Harper manicures his beard and hair, though.)

For a bonus yard-themed giveaway, the Nationals also are giving away branded grills! How's that for a hot giveaway? (Sorry.)

Bryce Harper gets the Chia treatment! Retweet for a chance at 2 tix, plus this #Nats grill: https://t.co/qvMSVJjmmy pic.twitter.com/kyw4ia2LI2

According to the Los Angeles Times, the Los Angeles Dodgers also are planning on giving out a Justin Turner Chia Pet. (They're also giving away a Magic Johnson garden gnome. See? There's a theme here!)

While we still wait (impatiently) for baseball season, hockey is going strong, and some players are already starting their playoff beards a little early. To celebrate, some teams are giving their fans lots of botanical giveaways to take home with them.

According to The Score, the San Jose Sharks are giving away Chia Pets representing Sharks player Brent Burns and his mighty facial hair.

So, what's the next lawn-related promotional giveaway to hit the stadiums? I would appreciate a Phillies lawn flamingo from spring training.