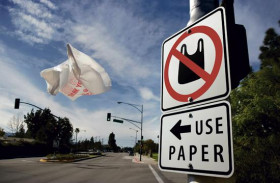 Beginning this Wednesday, Chicago will be the latest city to incentivize shoppers to bring their own bags to grocery stores, lest they want to pay a 7 cent tax per bag at the checkout line.

According to NBC Chicago, the fee applies to paper and plastic bags, and was passed to replace the city's ban on plastic bags that was repealed this month.

Five cents of the 7 cent fee will go to the city, and 2 cents will go to the store. The city anticipates the tax to generate around $13 million in annual revenue, with the city getting about $9.2 million of that.

Some bag types are exempt from the ban, including bags used to package loose bulk items, bags provided by a restaurant for food, dry cleaning or garment bags, plastic bags with a retail price of at least 50 cents each, and more.

To make things easier for Chicago shoppers, the city plans to distribute free "Chi Bags" at Chicago Transit Authority locations during evening commutes on Wednesday. Also, certain stores, like Target and Whole Foods, will give away free bags.