Cubs fans, keep on celebrating. You've all earned it. This was surely a World Series to remember for Cubs faithful and others. (Sorry, Cleveland.)

So, to keep the party going, the Cubs have some fun World Series-themed giveaways planned for the 2017 season, according to DNAInfo. 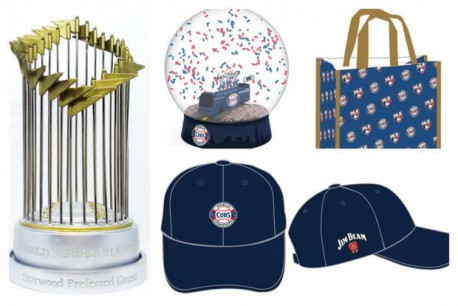 In May, fans can decorate their cars, laptops, offices, or whatever with some commemorative decals.

What made the World Series win so special was that it was the first since 1908. To put that in perspective, the team is giving out replica 1908 Cubs throwback jerseys.

Our favorite World Series-themed item is a snow globe depicting the team parading through the streets with confetti flying around.

Other than the World Series-themed stuff, there are a lot of cool Wrigley Field-themed giveaways, like a video board light, mini chalkboard and more.

With a living, breathing quote machine as manager in Joe Maddon, there's sure to be some spur-of-the-moment merchandise, like his now-classic "Try Not to Suck" merchandise.

The Cubs' marketing department sure tried not to suck during the off season, and they succeeded. (We'll still never understand why every MLB team insists on giving out fedoras, though.)