China Retaliates With Tariffs, Could Cause U.S. to Implement More 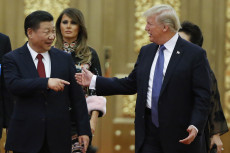 After the U.S. proposed additional (and threatened to ratchet up) tariffs against Chinese goods, China responded today by imposing new trade tariffs on $60 billion of American goods, escalating the already tense trade war between the competing nations.

In a series of tweets this morning, the president accused China of "actively trying to impact and change our election" by attacking industries known for being loyal to the president, and that the U.S. could retaliate further.

China has openly stated that they are actively trying to impact and change our election by attacking our farmers, ranchers and industrial workers because of their loyalty to me. What China does not understand is that these people are great patriots and fully understand that.....

.....China has been taking advantage of the United States on Trade for many years. They also know that I am the one that knows how to stop it. There will be great and fast economic retaliation against China if our farmers, ranchers and/or industrial workers are targeted!

Before this, Trump had threatened to increase the U.S. tariffs to roughly every item China exports to the U.S. This move could be enough for him to want to get the ball rolling on that.

The existing U.S. tariffs go into effect next Monday, and China's commerce ministry said it would impose its tariffs on that same day, but at lower rates than it previously mentioned, according to the BBC—5 percent on textiles, computers and small aircrafts; and 10 percent on chemicals, meat, wheat, wine and more.

The U.S. tariffs are much more severe, as we reported, with 10 percent penalties on items like handbags and textiles, with the possibility of that number reaching 25 percent next year unless the two countries can reach an agreement.

As of now, the U.S. looks like it will impose tariffs on about half of all Chinese imports, and items within the promotional products industry like luggage and food items, in addition to the textiles we mentioned before, will be subjected to them.

The good news, however, is smart watches are exempt, after major U.S. companies like Apple and Dell voiced their opposition to the tariffs, as a lot of their products are made overseas.

President Trump, sticking to his ongoing populist stance and perhaps oversimplifying the situation, responded with "Make your products in the United States instead of China."