China Tries 'Name and Shame' Tactics to Cut Down on Pollution 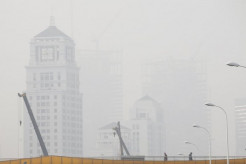 China is trying to shame businesses into cutting down on pollution. (Image via Reuters/Aly Song)

In an effort to crack down on manufacturing pollution in the smog-heavy country, China has named more than 20 businesses that it claims broke environmental rules, including paper mills and chemical producers.

"Naming and shaming is meant to deter firms from environmental violations," Alex Wang, an expert in Chinese environmental law at UCLA, told Reuters. "But where the economics don't work out for firms, and in places where non-compliance is common, [the tactic] won't have much of an effect."

The Chinese Ministry of Environmental Protection (MEP) had previously sent out reprimands to try to get companies to cut down on their environmental infringements. Now, the ministry is pointing the finger at local government and their lack of enforcement. For example, 487 officials in the Hebei province surrounding Beijing will face punishment.

Hebei, which contained seven of the top 10 most polluted cities in China last year, also set up a program to publish serious environmental violations at least twice a month.

"These campaign-style inspections still only catch violators intermittently, and China is going to need to make more dramatic reforms," Wang said. "We should hope for central inspection teams to bring the same sort of rigor to local enforcement in surrounding areas that we see when major international events like the APEC meeting or the Beijing Olympics come to town."