China Will Surpass U.S. In Wearable Tech Market This Year

The use of wearable technology in the form of watches that track things like heart rates and steps, clothing that monitors athletic activity and more, has been growing in popularity all over the world. According to Marketing Interactive, China's wearable tech market will pass the U.S. by the end of this year, with more than 20 percent of adult internet users in China wearing some sort of technological devices at least once a month.

The margin is still pretty slim, however, with China's figures reaching 21 percent and the U.S. at 20.4 percent. That said, the number is set to grow over the next two years, with estimates that 24.5 percent of internet users in China will use some sort of wearable tech. Compare that to only 11 percent in 2015. 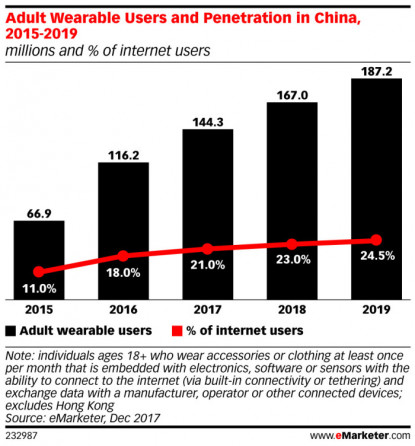 The real turning point in the Chinese market was the introduction of lower-cost items, like the Mi Band, which kickstarted the trend even though similar (albeit more expensive) items like the Fitbit existed already. By the time the Apple Watch came out in 2015, China had a market full of a rising middle class with a desire for high-end goods.

"Thanks to the availability of inexpensive devices with constantly improving functionalities, coupled with an enthusiasm for new technology among working adults, it is not surprising that the adoption of wearable technology is on the rise in China and will surpass the U.S. in 2017, Shelleen Shum, senior forecasting analyst at eMarketer, said, according to Marketing Interactive. "Wearable devices will continue to experience high growth among those in China."

5 Reasons to Rebrand Your Distributor Business
Comments
The Top Lists