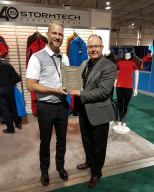 Stormtech, Burnaby, British Columbia, has announced that Chris Turner, director of Sales for North America East for Stormtech, has been named the 2016 recipient of the Imprint Canada Robert L. Scott Memorial Award. The award was presented Friday, Jan. 6, 2017, at the Imprint Canada Show in Toronto, Canada.

The Robert L. Scott Memorial Award was created to recognize individuals who display unparalleled commitment, integrity and enthusiasm for the Canadian promotional imprintable products industry. Nominations are solicited at the Western Imprint Show in Calgary, Alberta, each year. The nominations come from peers and competitors associated with the industry, and are then submitted to a select group of industry members who vote on the final winner.

“I was proud just to be nominated for this award,” Turner said. “To win it based on nominations from industry peers and coworkers makes it all the more special. I would like to thank Imprint Canada for their support and recognizing key individuals from our industry over the past 19 years. I would also like to thank Stormtech for encouraging a positive, customer-centric approach to the business and for the opportunities they have provided me in working with our distributors.”

Chris has been with Stormtech for the past two years, and has worked with several industry leaders in various managerial capacities over the past 24 years, including Nike, Adidas, TaylorMade and Ash City.