It seems college football rivalries are heating up, and T-shirts have become the recent battleground. First, the University of Southern California (USC) campus bookstore released a "Roll Tears Roll" T-shirt, an insult geared toward Alabama's "Roll Tide" slogan, ahead of the Alabama-USC opener Saturday. And now, an unaffiliated University of Alabama T-shirt has garnered legal action, according to AL.com.

The T-shirt, was available on TeePublic and said, "Our O.J. only killed Clemson." The reference compares O.J. Simpson, USC's football alum who was acquitted of murder charges, and O.J. Howard, Alabama's senior tight end. The USC sports media relations department told AL.com that they were only vaguely aware of the shirt. 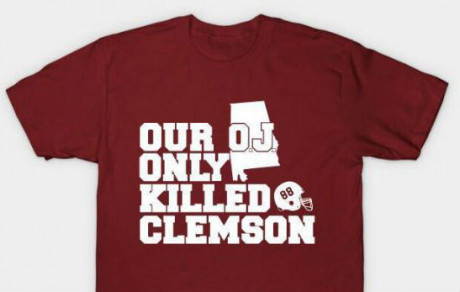 One might think that the USC implication would draw legal action, but the Clemson reference actually initiated the Digital Millennium Copyright Act (DMCA) infringement. Adam Schwartz, chief operating officer for TeePublic, told AL.com that the Collegiate Licensing Co. issued the DMCA, not Clemson itself.

"The University of Alabama initiated the request to remove the shirt, and the request was supported by Clemson, since it's marks were being used without license or approval," Tammy Purves, senior director of communications and creative services for the Collegiate Licensing Co., told AL.com.. "While both universities often support rivalry and game-day designs in good fun, neither university approves of merchandise with distasteful messaging."

The T-shirt has been removed from TeePublic, but it is still available on Teespring and other sites.