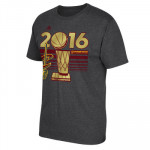 The Cleveland Cavaliers recorded the highest sales in site history on NBAStore.com. (Image via store.nba.com)

Whether it was the result of Cleveland Cavaliers fans finally getting to celebrate a victory or just passengers on the LeBron James hype train who wanted to celebrate him making good on his promise to bring a championship back to Cleveland, the Cavaliers broke a sales record on the NBA's webstore. So, for now, there's another title to bring home to Cleveland.

Cavs merchandise was the top seller on the NBA's web store from April to June. This was the first time since January 2015 that the team topped the list in any quarterly period, according to Crain's Cleveland Business.

Though an NBA spokeswoman told Crain's Cleveland Business that the league doesn't disclose specific figures in terms of merchandise units sold or dollar amounts, she did say that after Game 7 of the NBA Finals, the store had its highest sales day in its history, breaking the record previously set last season. The Cavs' 2016 NBA Finals Champions Locker Room T-shirt was the top selling item, and the top-selling locker room style shirt in the site's history.

Not surprisingly, the Golden State Warriors were in second for team merchandise sales on the site. Warriors star Steph Curry still held the top spot for jersey sales, but the next two spots belonged to Cavaliers players: James and Kyrie Irving at Nos. 2 and 3, respectively.