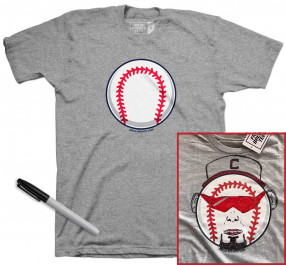 Fresh Brewed Tees has thought of a creative way to commend the Cleveland Indians' winning ways. (Image via Twitter)

While what they don has divided many, how the Cleveland Indians play should unite those who appreciate complete devotion to one’s craft. Coming off last year’s World Series appearance, the diamond denizens entered this season with unfinished business on their minds, especially since they lost a 3-1 edge over the Chicago Cubs in vying for their first championship since 1948. Last night, they bolstered their credentials as the squad to fall for this fall, as they notched their 21st-straight victory, clawing past the Detroit Tigers 5-3 to set the American League record for consecutive triumphs. Excited to engender additional joy among the Indians’ tribe of followers, Ohio’s own Fresh Brewed Tees has unveiled the Cleveland Baseball DIY Mini Mascot T-shirt, an innovative merger of team pride and artistic expression.

The company’s owner, Tony Madalone, visited Cleveland’s WKYC Channel 3 studios yesterday for the station’s Donovan Live! broadcast, commending the club for its amazing run, which not only has placed the Terry Francona-led bunch in the record books but has also given his charges the junior circuit’s best mark at 90-56 and a seemingly insurmountable Central Division lead of 13.5 games. Fresh Brewed Tees recently joined other apparel providers in lampooning the undefeated preseason run by the Cleveland Browns (Sunday’s return to reality had to have hurt the Dawg Pound), so this gesture again addresses the thrill of emerging victorious yet to a far larger extent.

Simply put, the Indians have been amazing since the August 24 genesis of this record-setting stretch, outscoring the opposition by 104 runs. One could argue that along with helping fans to show their gratitude for the torrid three-week period and to offer chances to display their creative side, Fresh Brewed Tees is also, perhaps indirectly, participating in the unending debate over the team’s controversial Chief Wahoo mascot. In other words, if supporters can so easily consider how to decorate T-shirts, what is stopping the franchise from tinkering with its artistic depiction? That matter figures to intensify as the postseason nears, but we will leave the issue to the powers that be. We can say, though, that the Indians have come a very long way since their wretched play inspired the “Major League” films. In fact, since the 1995 roster members tallied 100 victories in a strike-shortened 144-game schedule, advancing to the World Series in the process, the club has been a model of consistency, registering 14 winning seasons and making nine (soon-to-be 10) trips to the playoffs.

The Indians host the Kansas City Royals at Progressive Field tonight through Sunday. If they sweep the 2015 World Series champs, they will be within one win of the 1916 New York Giants’ Major League record for consecutive celebrations. Should they match or even top that jaw-dropping run, expect the Fresh Brewed Tees workforce to be especially happy campers. No matter what, though, the company’s idea has intensified the fan experience and offered yet another reminder that everyone loves a winner.