Coachella Claims Urban Outfitters Is Unlawfully Cashing In on Its Popularity 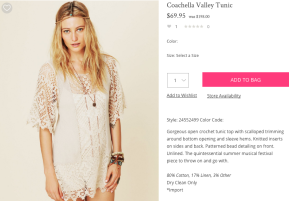 Urban Outfitters Inc. and the Coachella music festival seem like they would go hand-in-hand on paper. They both appeal to the same audience, after all. But, the company is in trouble with the music festival, after its Free People affiliate sold merchandise with trademarked verbiage.

Yes, technically, the Coachella Valley is the name of the geographic area. But, if you take one look at these items, you can tell the company is trying to appeal to the music festival patrons, not those who are looking for a hike in the desert.

Festival officials see it as Urban Outfitters Inc. cashing in on its brand recognition, using the word "Coachella" to boost online advertising and search engine optimization.

"As a result, a Google search for 'Coachella clothing' results in an advertisement for [Urban Outfitters Inc.'s] infringing goods," Coachella said in a complaint, according to Women's Wear Daily.

Festival officials argued that the use of "Coachella" is an effort to "misdirect customers" who are looking for officially licensed merchandise, instead sending them to Urban Outfitters and Free People to buy unauthorized goods.

The festival does, however, have existing partnerships with H&M and Pandora for lines of jewelry and apparel. This makes Urban Outfitters' merchandise direct competition in the retail space as well as the licensed apparel space.

Coachella asked the court for unspecified damages and for an order for Urban Outfitters Inc. to remove any of the infringing merchandise from sale, and to inform customers that the retail company is not affiliated with it.

More than a Buzzword: How to Cut Through Self-Care's Marketing Noise

How to Get Anyone to Like You
Comments
The Top Lists