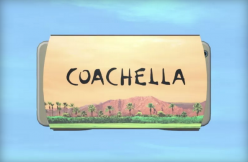 Image via The Verge

Attendees of this year's festival will be shipped a "welcome box" featuring a branded Google Cardboard headset. Coachella also is releasing a Coachella VR app so that Google Cardboard users can look through 360-degree photos from past festivals, interviews and performances from this year's event, and a map of the festival grounds.

The festival is taking place April 15 to the 17, and April 22 to the 24. Content will be updated on the Coachella VR app up until the first weekend of the festival.

Check out the video link below for more information:

Download the Coachella VR app + try out the VR viewer in your Welcome Box.https://t.co/jWzsNediLw

With everyone from McDonald's to Star Wars getting in on the virtual reality game, it definitely seems like a trend that is taking off in the promotional product space. What do you think? Let us know in the comment section below.