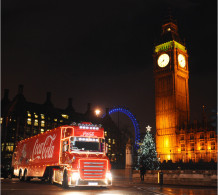 U.K. health officials say Coca-Cola shouldn't give sugary drinks to children in areas where tooth decay is higher than the national average. | Credit: The Sun

The head of the U.K.'s National Health Service (NHS) is trying to keep the Coca-Cola promotional truck from visiting cities and landmarks due to health problems associated with the consumption of soda.

Duncan Selbie, CEO of Public Health England, cited the role sugar plays in tooth decay and obesity in children as a reason to keep the truck from visiting areas like city shopping centers and local attractions to advertise its products.

"Big-name brands touring the country at Christmas to advertise their most sugary products to children and boost sales does nothing to help families make healthy choices and wider efforts to combat childhood obesity and rotten teeth," Selbie said, according to The Guardian. "Local authorities celebrating sugary drinks in this way need to reflect on whether it's in the best interests of the health of local children and families."

Coca-Cola plans to send two of its trucks to 42 locations across England and Scotland in the weeks leading up to Christmas. It includes big-name stops on its agenda, such as London's Wembley Stadium and the O2 complex.

According to The Guardian, 61 percent of Coca-Cola's planned stops are in places where both 5- and 10-year-old children have higher rates of tooth decay than average in England. This is the same number as children aged 10 and 11 who are overweight or obese.

The truck has already made some stops across the country. In some of those stops, such as Glasgow, protestors voiced their distaste for the company's marketing.

In Glasgow, protestors (including NHS officials) said that if Coke was going to come anyway, it should give out only water and sugar-free versions of its products.

"We're seeing increasing numbers of local protests against the truck, both from the public and council leaders, public health professionals and dentists," Professor Mary Fewtrell, nutritional lead at the Royal College of Paediatrics and Child Health, told The Guardians. "The motivation behind these is not to take the joy out of Christmas, but to recognize that linking fizzy drinks with the fun of the festive season is a marketing tactic and not good for child health."

Coca-Cola, on the other hand, argued that the selection of sugar-free products it offers is satisfactory.

"The Coca-Cola Christmas truck is a one-off, annual event where we offer people a choice of 150ml (5 fl. oz.) samples of Coca-Cola Classic, Coca-Cola Zero Sugar or Diet Coke, so two of the three options are no-sugar drinks," a Coca-Cola spokesperson told The Guardian. "This is also reflected in the take-up of samples on the truck tour, with on average over 70 percent of what we sample being a zero-sugar option."

The spokesperson added that the company has a policy against providing drinks to children under 12, unless the child's parent gives consent.