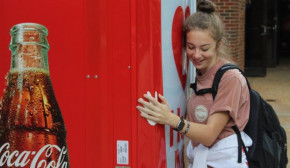 A Coke machine that dispenses drinks for hugs popped up on the University of Georgia campus. | Credit: Online Athens

In 1930, psychologist Dr. Harry Harlow theorized that infant monkeys, specifically rhesus macaques, needed their mothers for much more than just sustenance. He hypothesized that the physical connection and comfort provided by their mothers during infancy was crucial to development into adulthood.

To test his hypothesis, Harlow created mechanical "mothers" out of wood and wire. One was left bare, the other covered in a soft cloth. Even when the bare machine was holding food, the infant monkeys overwhelmingly chose the cloth-covered machine—their "mother" object. This proved his hypothesis that infant monkeys depended on their mothers for much more than food, and required physical touch, too.

Coca-Cola has conducted a similar theory on its own, and has found that a separate species of primate—humans—respond conversely, and will gladly hug a giant Coke machine (with no cloth cover) in exchange for sustenance in the form of a free coke.

Dang it if we don't love free stuff.

Coke has installed promotional machines on college campuses all over the world that don't require money, only a hug.

The machine, which looks like a regular Coke machine aside from the giant words "Hug Me" replacing the usual branding, dispenses a soda when a person wraps their arms around it, according to the New York Daily News.

"Whether you were hugging the machine or experiencing the event online, our goal was the same—to put a smile on your face and share that emotional connection," Coca-Cola spokesman Leonardo O'Grady said in a press release to New York Daily News. "Reactions were amazing. People really had fun with it, and at one point we had four to five people hugging the machine at the same time, as well as each other."

The promotion first started in Asia, but has made its way to U.S. schools, such as the University of Georgia.

"I drink a lot of Cokes, but I've never hugged a Coke machine before to get one," one UGA student told Online Athens. "It's something that you don't see every day. I think it's really cool."

So, what is the takeaway here? We're not psychologists, but we think it's something along the lines of: Humans will show their affection toward the less appealing, bare machine "mother" as long as it provides us free caffeine.