In response to Fidel Castro's death last week, San Francisco 49ers quarterback Colin Kaepernick is, again, defending his decision to wear a controversial Castro T-shirt back in August. According to Sports Illustrated, the crowd at the 49ers game against the Miami Dolphins on Sunday booed Kaepernick when he arrived on the field. 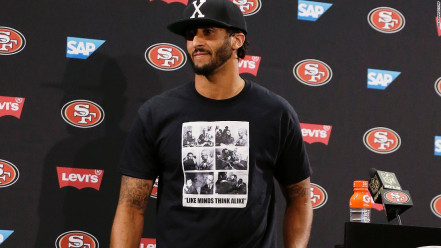 Colin Kaepernick still is at the center of controversy for wearing this T-shirt back in August. (Image via CNN)

“One thing that Fidel Castro did do is they have the highest literacy rate because they invest more in their education system than they do in their prison system,” Kaepernick told a reporter, according to Sports Illustrated. “Which we do not do here, even though we’re fully capable of doing that.”

The aforementioned T-shirt of Castro and Malcolm X read, "Like Minds Think Alike." Kaepernick sure knows how to stir things up, but the negative press doesn't seem to negatively affect his merchandise sales. Even after his controversial protests, Kaepernick jerseys still topped NFL jersey sales.