Ryan Trahan, a freshman cross country runner at Texas A&M, says his life pretty much revolves around two things these days: running and his line of water bottles that he and a friend developed in high school.

Because of his involvement with the latter, the budding entrepreneur is in some trouble with the NCAA. The college sports governing body is threatening to revoke Trahan's eligibility because he is "promoting his company with his name, image and likeness as an athlete." 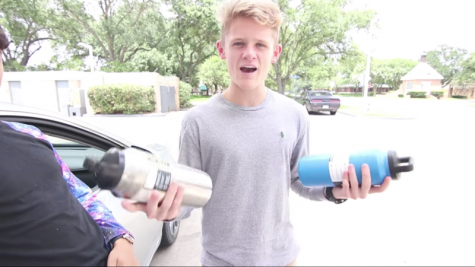 College athletes have to abide by very strict rules. In order to maintain eligibility, players can't make money off of their image or likenesses. It's a very controversial topic, and it makes sense on some level. They aren't professionals just yet.

But, is Trahan advertising his water bottle line on YouTube the same as a football player's family launching an e-commerce outlet to sell merchandise?

Student-athletes can own and run their own business without violating NCAA rules if it’s not based on their athletics reputation or ability.

Trahan's company, Neptune Bottle, specializes in reducing the amount of single-use plastic bottles, and donates a portion of its proceeds to the Plastic Oceans Foundation.

The Texas A&M athletic department is currently working with the NCAA to solve the issue, but the NCAA said it hasn't yet received a former waiver request.

Once it does receive one, however, the chances look pretty good for Trahan. A kicker at the University of Central Florida was granted a waiver after he was ruled ineligible for getting advertising money from his YouTube channel.

As long as he didn't reference his status as the kicker, he could still accept money for his videos. So, basically what this means for Trahan is that he can continue advertising his Neptune Bottle like he did before, but he can't say "I like using these bottles because it hydrates me after I run a race for Texas A&M University, for which I am a cross country runner."

"I don't understand how I'm allowed to have a job at McDonald's or something while being a student-athlete, but I can't have a company that I'm passionate about, that I've been working on for over a year now, and keep my identity," Trahan said in a video post. "Like, how is that right in any way?"

The NCAA's rules regarding monetizing activity and use of an athlete's likeness can be murky. Do you think Trahan is in the right here?