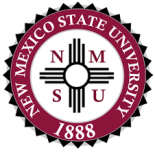 One young New Mexico State University soccer fan got to design a T-shirt that the school handed out before the women’s soccer team faced off against Utah Valley last night.

Mason Gurule won a contest put on by NMSU’s social media department from the beginning of the pandemic, where fans could submit designs for T-shirts, tickets and more.

Coincidentally, Gurule’s older sister will have her own drawing featured on men’s basketball season tickets for the upcoming season.

“I took them by the Fulton Center the other day to pick up their shirts, and the people there were so sweet and kind to him and raving,” the kids’ mother told the Las Cruces Sun News. “They showed Aubrey her basketball ticket, and there’s just so much fun stuff to look forward to for them to keep us going and doing fun things. You never know what can happen when you try something new.”

Big one on Thursday night - we'll see you there, Aggies! #AggieUp

You never know what can happen when you try something new. That's a good reminder for promotional marketers. And while the shirt obviously means the world to the young artist, it’s also a show of goodwill from the university to the surrounding community, and could convince some people to attend games in town.

There have been a few instances of kids’ drawings ending up on official sports merchandise, like the young University of Tennessee fan who created a T-shirt that came with a full scholarship for him, or Cincinnati Reds outfielder Nick Castellanos’ son’s design.

Sometimes less is more when it comes to T-shirt designs. And something sentimental can win out over "professional" design. Plus, we often see these designs getting some good buzz on social media and the web, extending the promotional reach of an otherwise standard item.