The Indianapolis Colts signed Rodrigo Blankenship as an undrafted free agent just ahead of the 2020 NFL season. The team was likely drawn to the rookie kicker based on his strong, if underrated, college career at the University of Georgia, where he was a perfect 200 for 200 on extra points and set the record for longest field goal in Rose Bowl history.

That, or they just really liked his glasses.

Yes, despite his track record of collegiate success and a stellar start to his NFL career with the Colts, Blankenship, whose nickname is "Hot Rod," is probably best known for his specs. Honestly, we can see why. Look at these things: 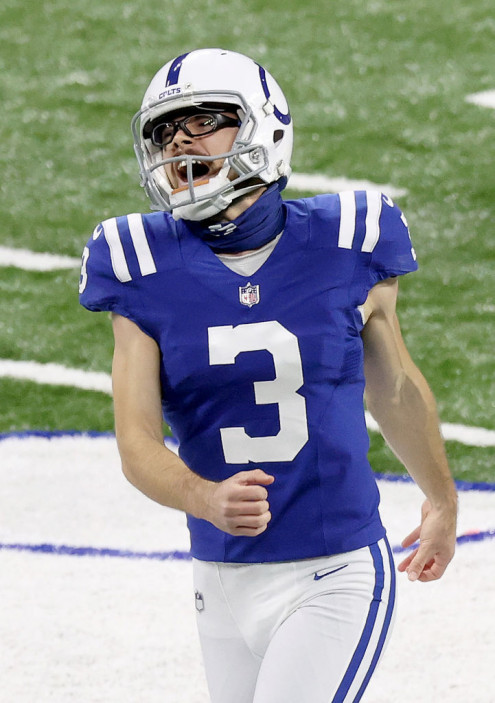 Blankenship, of course, has recognized the incredible branding potential of his signature look, leaning fully into his status as the NFL's No. 1 Top Bespectacled Kicker. Just a few months into his rookie season, Hot Rod already has his own branded merchandise store (tagline: "Respect the Specs") filled with a whole bunch of clever designs.

He's clearly having fun with it, too. Case in point, the "Eyeron Man" T-shirt, in which a cartoon Blankenship gets the comic-book treatment: 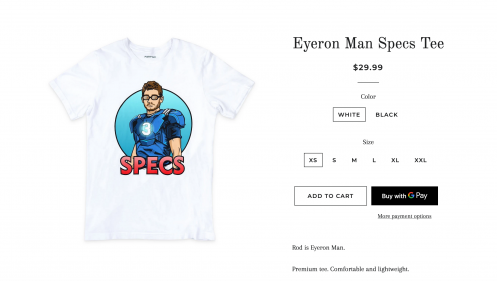 There are three versions of that tee (each with a different of Blankenship's nicknames on it), all printed on tagless, 4.3 oz., 100 percent combed ring-spun cotton fine jersey. There are also two shirts that feature a design mimicking an eye exam with a big pair of glasses as the bottom row, and several designs with the phrase "Walk-On Mentality" in honor of Blankenship's walk-on status at Georgia.

It's all a good time. And it's great to see Blankenship, one of this very weird NFL season's best stories, fully utilizing merchandise to build his personal brand. We've seen this kind of thing from superstars like Kansas City Chiefs quarterback and Super Bowl MVP Patrick Mahomes. It's cool to see a kicker—typically a background position in the NFL—step into the spotlight this way.

If every NFL player had his own merchandise store outside of the teams' official (and officially licensed) channels, that'd mean more opportunity for promo distributors. (Each of the league's 32 teams has 53 players on its active roster. That'd be a lot of merch stores!)

Until then, let's all just sit back and appreciate the Hot Rod's branding genius. And, Rodrigo, if you're listening, boot some 50-yarders this weekend. My fantasy team could use 'em.