Comic-Con Bags, 'Pokemon Go' and the Case for Augmented Reality 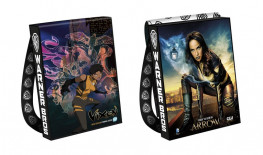 As we've seen with the unbelievable popularity of "Pokemon Go", people love augmented reality—or AR—when it's done right. (The hundreds of kids descending on Central Park for one Pokemon is a good example.) For this year's Comic-Con in San Diego, Warner Bros. unveiled 18 collectible bags, each branded with Warner Bros. films and television shows, that feature an AR feature via the Blippar app.

According to IGN, attendees who scanned all 18 bags could unlock some fun surprises.

According to Comic-Con, each bag featured three panels of artwork. On one side, the bag has a Velcro-fastened flap featuring show- or movie-related pictures that open to reveal a second design. Warner Bros. supplied more than 135,000 bags to the convention.

This is even more of a case for AR. We've seen it in both gaming and advertising. Tom Goos, in his discussion with us about PPAI's #GetInTouch campaign, described promotional products as the tangible partner to digital advertising. And this proves that it is a fully reciprocal relationship. In this case, the bag is equally important as the app in terms of branding and exposure to content.

As of November 2015, 68 percent of adults in the U.S. owned a smartphone, according to PC World. That's a 35 percent increase over four years. At that rate, the availability of smartphones will make AR-enabled, tangible promotional products even more effective.

If investments from the big tech giants, like Apple, are any indication, it looks like those with their fingers on the pulse of technology think there's something significant about AR. Apple CEO Tim Cook told The Verge that he sees AR as a major component in the company's future. He specifically cited "Pokemon Go," which he calls "Pokeyman." Check out the soundbite below.

Cook saw the "Pokemon Go" phenomenon as a good sign of AR's potential.

"We have been and continue to invest a lot in this," Cook said. "We are high on AR for the long run. We think there's great things for customers and [it's] a great commercial opportunity. And so we're investing. The No. 1 thing is to make sure that our products work well with other developers' kinds of products, like [Pokemon]. That's why you see so many iPhones in the wild chasing [Pokemon].

Snapchat, the increasingly popular social media platform, also is getting its hands into the AR game with a new, patented feature. According to Popular Science, the app recognizes objects that users take photos of, and then serves ads based on what they're doing at that given time. For example, let's say you take a photo of a new coffee mug that you receive. You might see a new Snapchat filter for a coffee brand when you take your next selfie.

What do you think? Is this AR-enabled bag another case of a trend, or is it something that you think is here to stay? With the ever-growing focus on the ability to share content and social media integration, it just might be. Let us know what you think.