Coming Soon: A Fitbit for Your Brain 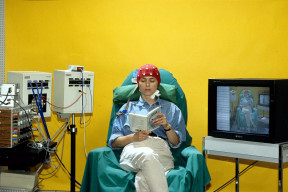 A woman attached to an EEG machine. (Image via Newsweek)

Last week, we reported on the man whose Fitbit saved his life. Wearable fitness trackers are ubiquitous, and their potential hasn't even been fully realized.

According to Newsweek, Tan Le, CEO of Emotiv, a company that manufactures electroencephalography (EEG) products for consumers, that brain-monitoring wearables are the next frontier. Basically, EEG signals can detect the signals associated with sleep or power surges attributed to epileptic seizures. Le wants to bring these signal detections to a wearable product, like a Fitbit or Apple Watch.

"Anxiety, depression, schizophrenia, dementia, Alzheimer's, Parkinson's, autism ... most of these are developmental in nature," said Le, according to Newsweek. "The markers probably exist decades before the symptoms manifest themselves. We need more early intervention and early monitoring."

The problem, Le said, is that people with healthy brains never have brain scans because the process, previously, was too labor-intensive. With the surge in wearable technology, it's now possible to track the brain to better understand it. Neuroscientists also could use that information to look for early biomarkers indicative of neurological disorders.

Of course, the success of these wearables will depend on getting users to wear these EEG rigs and share the data with anonymous scientists.