College football fans who hold allegiance to the Southeastern Conference (SEC) have found themselves quite fortunate since the 1992 season, when the University of Alabama Crimson Tide throttled the University of Miami Hurricanes, 34-13, to win the national championship. That upset victory initiated a run that has yielded 12 more national crowns for the conference’s constituents, with Florida, Tennessee, Louisiana State and Auburn joining the Tuscaloosa-situated institution as a collegiate conqueror. Last night, the Crimson Tide kept the University of Georgia Bulldogs from gnawing away at its legacy and also adding their name to the list of recent SEC national victors, scoring a 26-23 overtime triumph in the 2018 College Football Playoff National Championship, a result certain to make devotees even more eager to secure championship merchandise. 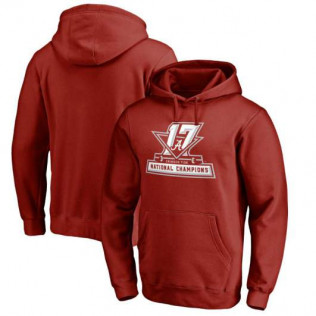 Fans can look to the hottest program in college football to beat back cold temperatures thanks to this hoodie. | Credit: FansEdge

Atlanta’s Mercedes-Benz Stadium hosted the matchup between the conference foes, with Alabama searching for its fifth national coronation since the 2009 campaign and Georgia hoping to claim last-team-standing status for the first time since 1980. Yours truly caught only the first half, so when tuning out with the Bulldogs holding a 13-0 edge, I thought they would end their drought only to learn this morning that the tide turned thanks to Alabama coach Nick Saban’s decision to call on freshman quarterback Tua Tagovailoa (his is definitely destined to appear on a few lists of the best athlete names) to mount a comeback. Fortunately for me and those who watched the game through to the moment when the signal-caller connected with DeVonta Smith for the winning score, a DVD and Blu-Ray set is among the means to commend the assertion that nobody produces better teams than the SEC. Other items that center on Alabama indirectly make the claim that nobody fields a squad superior to Saban’s, as producing commemorative goods for his charges’ feats has become pretty old hat by now for companies. Speaking of hats, here’s an actual one that looks sharp.

No matter how dominant a college program proves (imagine having been an entity peddling UCLA Bruins basketball merchandise from the mid-1960s through the mid-1970s.), the excitement surrounding each season always compels industry figures to come up with interesting products, as fans will forever want to immortalize their heroes’ accomplishments. In doing so, they will obviously crave authentic commodities, with IMG College Licensing having striven ahead of last night’s tilt to warn attendees about the possibility of their purchasing unlicensed materials.

The amazing pass from Tagovailoa to Smith ended this season, but it initiated anticipation for the next campaign, where pundits will ponder whether Georgia can remain a consistent contender or if Alabama—holders of the fifth-ranked recruiting class—can keep rolling along as a dynasty. Perhaps other conference will make the SEC a semi-afterthought and compel companies to put on their thinking caps to produce even more intricate hats, shirts and other merchandise. The countdown to the 2018 regular season has begun!