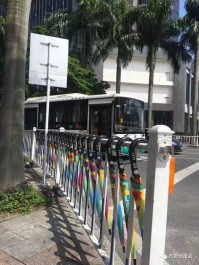 Let's look at an idea purely in a vacuum. Don't worry about logistics or any other variables just yet.

You're out and about in town. The weather report said it would be cloudy all day, but with just a 10 percent chance of rain. That's low enough that you decide to gamble and leave your umbrella or raincoat at home. But, just as you reach the point of no return, where you're too far from home to get back quickly, the skies open up and the clouds wage precipitous war from above. Luckily, you spot a bastion of hope: A kiosk of umbrellas as part of a sharing program, where you can just grab an umbrella and go.

Sounds pretty great, right? Well, a startup in China tried to make this scenario a reality by making hundreds of thousands of umbrellas available in 11 cities across China. But, the spirit of honest sharing didn't quite prevail, as about 300,000 of Sharing E Umbrella's items are now missing in action after users kept them for themselves.

Cities all over the world are using sharing programs with things like bicycles, but Sharing E Umbrella founder and CEO Zhao Shuping said the idea didn't fully translate to the umbrella market.

"We were really impressed by the bike-sharing model," he told the South China Morning Post. "Umbrellas are different from bicycles. Bikes can be parked anywhere, but with an umbrella you need railings or a fence to hang it on."

The idea, theoretically, would work like this: people go to stands by subway and bus stations, and deposit 19 yuan (plus 0.50 yuan fee) for 30 minutes of usage. From there, the company had no way of tracking where the umbrellas were.

It's not necessarily just the fact that umbrellas are much smaller than bicycles, however. The sharing economy is sweeping across the U.S. and Europe, but it's a relatively new idea in China.

The South China Morning Post reported that last month, a bicycle share company had to cease operation after 90 percent of its bikes were stolen.

Shuping hasn't given up hope in his charitable endeavor, however. According to Business Insider, he plans to release another 30 million umbrellas by the end of the year, after spending a few months creating a way to add GPS tracking into the process to avoid theft.

(Editor's note: I've been looking for a good place to use "when it rains, it pours" in this story, but opted out of it. Journalism 101: avoid clichés.)