At the start of the NCAA Tournament, we got a look at the impressive gift set that players received. Items like towels, sheets, games and apparel helped them get settled and stay sane while they’re in the bubble in Indianapolis.

It came to light, however, that the Women’s NCAA Tournament in San Antonio did not have these same perks, or even the same branding on the products.

Ali Kershner, a sports performance coach for Stanford University, posted pictures comparing the amenities for the men’s and women’s teams. The “weight room” for the women amounted to a single rack of dumbbells and a stack of yoga mats; the food looked more like a packed lunch compared to the buffet spread for the men’s teams; and the “swag bag” given to the women paled in comparison to their male counterparts.

Here’s a side-by-side of the two: 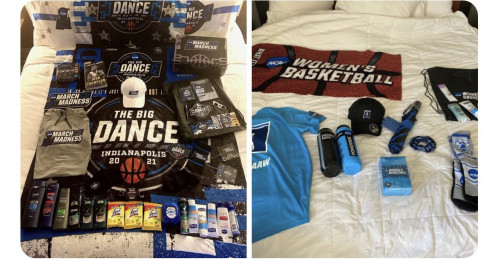 You’ll also probably notice that all “March Madness” and “The Big Dance” branding is absent from the women’s merchandise.

That’s because the NCAA doesn’t extend its usage of those phrases to the women’s tournament. If you watch a game during this year’s tournament, you’ll notice that the court and any other branding says “NCAA Women’s Basketball” rather than “March Madness” or “The Big Dance.”

These disparities between the two tournaments has been creating controversy all across social media and other platforms, and the NCAA reportedly said it will discuss the situation further with association leadership “in the very near future.” The NCAA already rectified the weight room situation, which it first claimed was a consequence of limited space.

But, for 2021, though, a year where players will compete in a tournament very different than past years', it’s too late to fix the promotional merchandise designed not only to commemorate an exciting period of their lives and careers, but also to live comfortably in a precarious situation.