When the Brooklyn Nets debuted their "Brooklyn Camo" uniforms for this season, featuring a trim design pattern inspired by the Notorious B.I.G.'s love of Coogi sweaters, it seemed like a perfect partnership. The Nets, who relatively recently moved to Brooklyn, would celebrate one of the borough's most famous artists of all time, and the design itself is flashy as heck. It all seemed perfect.

Coogi, an Australian fashion brand, wasn't into it, though, and claims that the Nets, Nike and the NBA didn't have proper authorization to use the design.

It seems like the Nets and Nike tried to get around calling the pattern anything Coogi-related, opting instead for the "Brooklyn Camo" label and the ability to plead ignorance. But, Coogi and its legal team aren't buying it.

"While other colorful and ornamental sweaters have and continue to exist, the highly distinctive and ornamental designs of Coogi sweaters and apparel have become exceedingly famous," the company said in a lawsuit, according to Nets Daily. "The brand demands the Nets stop wearing the pattern and selling the copyrighted merchandise online and at its outlet at the Barclays Center." 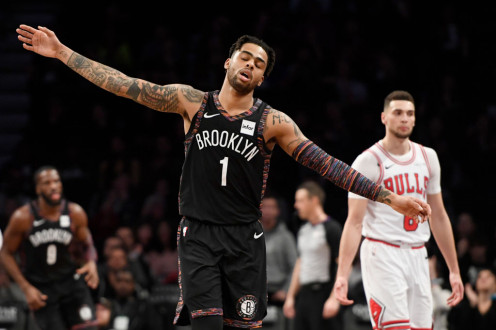 Coogi is suing the Nets, Nike and NBA, claiming they didn't have proper clearance to use its famous design elements on uniforms. | Credit: Getty Images by Sarah Stier

It's even harder for the Nets to claim this is all a coincidence when there are easily-found Biggie verses that mention Coogi. Ladies and gentlemen of the jury, Exhibit A from "Big Poppa," arguably one of the most famous Biggie songs:

“[The defendants] were well aware that Biggie neither wore nor rapped about anything called ‘Brooklyn Camo,'” the lawsuit says. “But they created, marketed and sold and distributed ‘Brooklyn Camo’ products so as to confuse consumers about the connection between their goods … and Coogi.”

Right now, the "Brooklyn Camo" design is not only still for sale, it's a major design element on the Nets' online store. It's wrapped around the team logo, streaked across the navigation bar at the top and used in different advertisements.

This would be pretty huge if the Nets were forced to ditch this design, because these "City Edition" jerseys have been huge hits for just about every team, and Brooklyn has been using their design more than any other team, it seems.

But, the legal precedent is there for the Nets to be found in the wrong here. Remember that Supreme Court case about cheerleading uniforms that ended with the decision that, yes, design elements can be trademarked?

The court will have to decide whether the splotches of color qualify as a proprietary design element for Coogi, but for the Nets to claim anything other than Coogi's influence would be absurd.

Coogi could at least end up getting some financial settlement from the Nets, the NBA and Nike. We're not lawyers, but we think the most fitting means of doing so would be to write them a letter demanding they "Gimme the Loot."