All right, who’s it going to be? Miller Lite or Coors Light?

No, we’re not actually talking about which beer you prefer. You don’t even need to drink beer to weigh in on this.

Who has the better promos? Because they sure are going head to head at the moment.

Miller Lite had been off to a hot start with products like beer can video game controllers, beer can antennas, bar-scented candles, single-sleeve shirts for vaccination, and now a can cooler in collaboration with New Balance.

But, look at that, it’s Coors Light coming around the outside and making this race close with its “Hold My Coors” collection of products that do just that—hold your beer.

What happened here is that, while Miller Lite created some undoubtedly original ideas across a few months, Coors decided to hit the NOS button and catch up faster than Dominic Toretto. 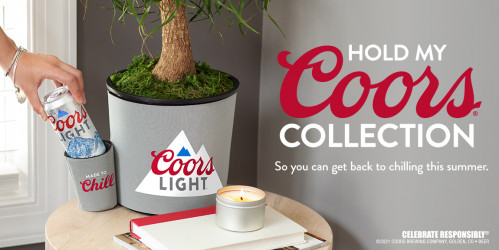 “This summer, we’re all looking forward to enjoying the season like never before—which is why Coors Light is inviting everyone to slow down and savor their moments of chill,” said Coors vice president of marketing Marcelo Pascoa. “As part of this invitation, we’ve created a collection that helps our fans do just that: relax with a mountain cold Coors Light, without even having to hold it! The ‘Hold My Coors’ collection was made for anyone who wants to enjoy a cold one and kick back with their family and friends.”

The collection is available on the Coors Light shop website, among other promo items like T-shirts and accessories. 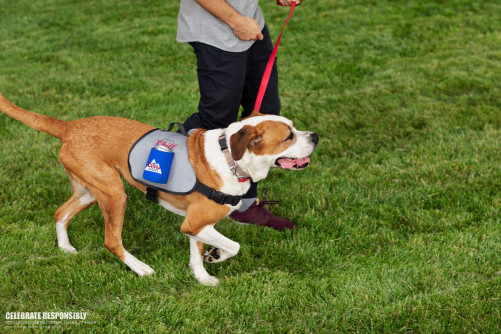 Before anyone starts placing late bets on Coors to win this race, however, Miller isn’t going down easy.

In another example of beer-can-holding ingenuity, the company has created its own baseball mitt, this time with an oversized pocket for when your over-confident friends toss you a beer from way downtown. (It also doubles nicely for socially-distanced hangs.)

However, there are only five “Relief Catchers,” which Miller calls “the first baseball glove designed to catch beer,” available—and only available in Canada, to celebrate the return of live baseball—rather than the online availability of Coors’ glove, which holds beer but isn’t great for catching it.

So, who will win? Honestly, this isn’t a competition. Everyone can win. That’s right. We’re going to be that new-age teacher that doesn’t give grades, instead saying that each company created products distinct and effective in their own way. And we wouldn’t even be lying or being falsely diplomatic.

This is so much fun to see. The product designers must be having a blast, and here we are talking about their products. That’s about as close to “everyone wins” as possible. Participation ribbons for everybody!

A&W Features Its Employees in 'Anti-Celebrity' Meals With Store Signage, T-shirts and More