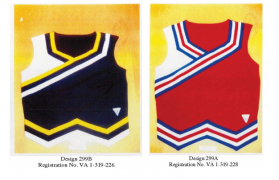 Two uniform suppliers, including Varsity Brand, whose designs are seen here, are battling a copyright case since 2010. (Image via Bloomberg)

Hard to believe a fight over cheerleader uniforms would land in the U.S. Supreme Court, but here we are. In short, two cheerleader uniform suppliers, Star Athletica, Chesterfield, Mo., and Varsity Brands, Memphis, Tenn., have been battling over a copyright case since 2010, according to Ars Technica. However, this case has the potential to set the standard for cheerleading uniforms and copyrights nationwide.

The problem is that no court can decide what determines a cheerleading uniform. Is it the stripes and chevrons, or is it simply the silhouette of the top and skirt? If the stripes and chevrons are an essential part of the uniform, then Varsity Brands has no case. In other words, where does the design of a cheerleading uniform take over from the functionality?

The court justices are expected to hear arguments during the court's next term, which will begin in October.