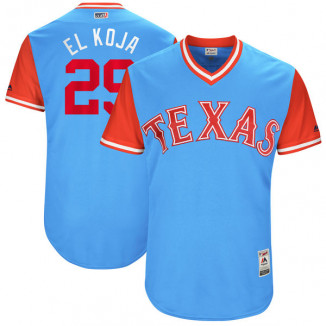 Texas Rangers slugger Adrian Beltre had hoped to go by "Kojak" on his MLB Players Weekend jersey. (Image via mlbshop.com)

The Phillies have ­­given us here in Philadelphia very little to cheer about this season, as they hold the worst record in baseball at 43-72. No matter the dismal nature of this campaign, the franchise that has produced some of the game’s greatest nicknames had me pumped for August 25-27’s MLB Players Weekend because although I know they are likely going to help the visiting Chicago Cubs gain breathing room in the very tight National League Central race, I still expected to catch a collection of creative sobriquets on their jerseys. The long arm of the law, though, threw us a curve, as pitchers Zach Eflin and Hoby Milner learned that copyright issues will keep them from going by “Led Zeflin” and “Hoby Wan Kenobi.”

Being a huge classic rock and “Star Wars” fan, I loved the intended nods to English legends Led Zeppelin and Jedi master Obi-Wan Kenobi, feeling they would flavor a relatively dull set of nicknames. (Catcher Andrew Knapp’s “Knapp Time” is pure genius, however.) Major League Baseball instituted the three-day experience to allow its athletes to express their individuality, which customized bats and cleats will also help them to do; commend pioneers in their careers through uniform sleeve patches; and call attention to cherished charities and causes through the donning of T-shirts during pregame workouts and postgame interviews.

The entity, which is making the unique apparel available online, will draw support for the MLB-MLBPA Youth Development Foundation by auctioning off game-worn tops, and while it would be awesome to try to secure a “Led Zeflin” or “Hoby Wan Kenobi” keepsake, the powers that be shook off the requests by Eflin, a right-hander struggling in his first full season in the bigs, and Milner, a southpaw who debuted June 24.

The newbies are not the only diamond dwellers, though, to receive an unfavorable verdict. Adrian Beltre, the latest lumber wielder to join the 3,000 Hits Club, learned that he could not channel his inner Telly Savalas by wearing “Kojak” on his uniform. According to a tweet by Evan Grant, of The Dallas Morning News, the Texas Ranger slugger sported that nickname as a boy, owing to his shaved head. Instead of having everyone recall the crime drama that ran from 1973 to 1978—with Savalas as the titular New York City police detective—the surefire Hall of Famer will go by “El Koja.”