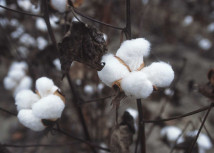 The increased popularity of tri-blend athletic wear and the possible widespread use of hemp as an everyday material added more variables to cotton's popularity and stability. Is the cotton T-shirt’s reliability and popularity enough to keep it at the top of the game? Or will increasing prices (especially as international trade remains volatile) and availability of affordable alternatives push cotton out of the lead?

It's unlikely that cotton will lose its spot as the top material for apparel production any time soon, but increasing costs, uncertain availability and several other issues are worth monitoring.

According to Agrimoney, the International Cotton Advisory Committee forecasted that cotton would possibly reach a five-year high next year, with inventories hitting their lowest point since 2011-12. And cotton production worldwide has had its share of problems.

India, the world’s largest producer of cotton, saw losses due to pest infestations, and is expected to decrease its total cotton plantation sites for the 2018-19 season.

In the U.S., where cotton production and export has maintained consistent, producers in some parts of the country are worried about possible environmental issues that could hamper cotton production.

WDSU reported this week that Mississippi farmers told the USDA that they plan to plant fewer crops this year, including cotton.

“They plan on planting 580,000 acres of cotton, down 8 percent, even though cotton plantings are rising nationwide,” the article said.

Experts at Mississippi State University said that if the weather patterns play out favorably, the state’s cotton production could grow, as there’s the added incentive of a federal subsidy plan for cottonseed included in the Farm Bill.

“This measure will provide cotton producers and lenders some certainty as they prepare for the 2018 growing season,” National Cotton Council of America (NCC) chairman Ronnie Leed said in a statement. “The new policy will help ease the financial burden as producers struggle to cover total costs.”

Texas, the leading cotton producer in the U.S., is ahead of its average pace of cotton production for the year. However, environmental factors like drought and soil moisture are still an issue in the Northern High Plains of the U.S., and Agrimoney reported that USDA officials said some cotton producers in the area were “undecided” about planting cotton this year because of that.

USDA officials are concerned about dry soil in Australia, too. What's more, China announced tariffs on more than 100 American goods, including cotton and polyester products.

This brings up the idea of alternative materials. Polyester has been cotton’s synthetic competition for decades. Environmental concerns have caused polyester production in China to decrease after the country made a push to be more eco-friendly in production.

There’s also the possibility of hemp. For the first time, a U.S. apparel company is using U.S.-grown hemp for its products. In 2014 the Farm Bill removed federal restrictions on industrial hemp, which coincided with the legalization of cannabis in Colorado and Washington that same year.

As the growth of cannabis becomes legal in more states, and possibly on the federal level in Canada soon, it makes hemp a resource to pay attention to in the ongoing debate of whether or not cotton will be the go-to material for clothing.

In terms of customer desire, the booming athletic apparel market would indicate that tri-blend, form-fitting and moisture-wicking materials are in high demand, but is a relatively small section of the apparel market enough to dictate overall trends?