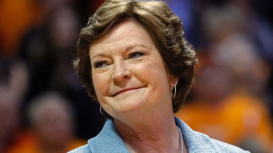 The Pat Summitt Foundation said that counterfeiters are illegally selling merchandise and claiming that proceeds benefit the foundation. (Image via Twitter)

Following the death of Pat Summitt, Hall of Fame coach of the University of Tennessee women's basketball team, members of her foundation warned that counterfeiters not only are selling unlicensed merchandise online, but claiming that the proceeds will go toward the foundation.

The Pat Summit Foundation tweeted last night that it found memorial shirts online from merchandisers that had not gotten permission to use Summitt's name or image.

We have contacted those selling the shirts but they are not responding. We want you to be informed.

To clear the issue, the foundation tweeted that the licensed merchandise commemorating Summitt's life will go on sale tomorrow on its website.

We will sell the only authorized (legal) commemorative shirt honoring Pat & benefiting her foundation (100%) this Friday. Stay tuned.

The Pat Summitt Foundation awards grants to organizations researching treatments for Alzheimer's disease, and supporting patients, their families and caregivers. Summitt was diagnosed with Alzheimer's disease in 2011, according to The Washington Post. She passed away on Tuesday.