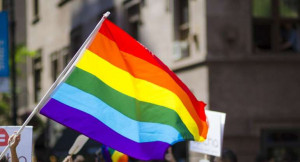 Blaine Adamson, the co-owner and manager of Kentucky printing shop Hands On Originals (HOO), won a major court battle this week, according to The Washington Post. Because Adamson has a strong religious background, he refused to print a gay pride T-shirt for the 5th annual Lexington Gay Pride Festival put on by the Gay and Lesbian Services Organization (GLSO). The T-shirt would have read, "Lexington Pride Festival 2012," alongside the No. 5 and several rainbow-colored circles.

The Lexington Fayette Urban County Human Rights Commission said this violated the Lexington County law banning sexual orientation discrimination in public places. But it looks like a Kentucky appeals court did not see it that way. The three-judge panel ruled, on a 2-1 vote, that Adamson's actions did not violate the law.

"Thus, although the menu of services HOO provides to the public is accordingly limited, and censors certain points of view, it is the same limited menu HOO offers to every customer and is not, therefore, prohibited by the fairness ordinance," the ruling states.

HOO’s conduct was discriminatory against GLSO and its members based upon sexual orientation or gender identity…. GLSO serves gays and lesbians and promotes an “alternative lifestyle” that is contrary to some religious beliefs. That lifestyle is based upon sexual orientation and gender identity that the United States Supreme Court has recently recognized. In Obergefell versus Hodges, the Supreme Court held that the fundamental right to marry [including in a same-sex marriage] is guaranteed to same sex couples under the Due Process Clause and the Equal Protection Clause. … Regardless of personal or religious beliefs, this is the law that courts are duty bound to follow.

Taylor also argued that the GLSO's T-shirt should be protected by the First Amendment:

While free speech is not without its limitations, nothing in the promotion of the Festival by GLSO came close to being outside the protections of the First Amendment. The Fairness Ordinance in this case is simply an extension of civil rights protections afforded to all citizens under federal, state and local laws. These civil rights protections serve the societal purpose of eradicating barriers to the equal treatment of all citizens in the commercial marketplace.

This legal case is an interesting one, because it seeks to establish whose First Amendment rights are superior: the printer or the customer. Many are saying that if the T-shirt printer is forced to print these gay pride shirts that contradict his beliefs, it's his rights that are being violated. However, by refusing to print the GLSO's messaging, their right to free speech is denied.