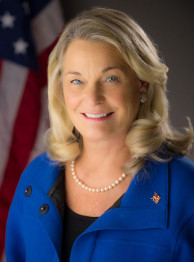 The Consumer Product Safety Commission (CPSC) announced it has named Ann Marie Buerkle as acting chairman, according to a press release. Buerkle is a former New York representative who has served as a CPSC commissioner since 2013. She was recently voted vice chair.

Buerkle will replace Elliott Kaye, who recently resigned, but will stay on as commissioner. Prior to his resignation, Kaye wrote a statement criticizing President Trump's executive order that called for the elimination of two regulations for every new one added. Kaye said the CPSC would not follow Trump's order because it would be "counter to [the CPSC's] safety mission."

“I will work to enhance relationships so that CPSC can leverage the knowledge, insight, and expertise of the entire consumer product safety community," Buerkle said in a statement. "We are all consumers and what we do at CPSC impacts the lives and livelihoods of all Americans. If we take a thoughtful, collaborative approach, we will impact the culture of product safety in a positive and meaningful way."

Her term will run until October 2018.