Last February, the Consumer Product Safety Commission (CPSC) came out with a simple message: Hoverboards are unsafe. This preceded mass recalls, and companies (like Amazon) stopped stocking the items on their sites. In March of this year, two children died in a house fire in Harrisburg, Pa., as a result of a hoverboard catching fire.

The CPSC came forth with another message this week: Stop using LayZ Board hoverboards, specifically. 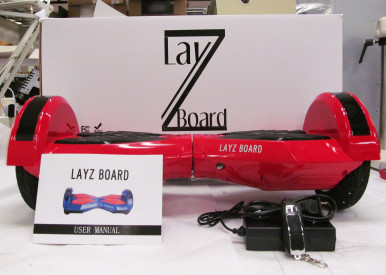 The CPSC has evidence that the LayZ Board hoverboard brand is responsible for the Harrisburg, Pa., house fire that killed two children. (Image via CPSC)

According to the CPSC, it has reason to believe that LayZ Board was the brand of hoverboard responsible for the Harrisburg fire.

Due to the fire hazard posed to consumers of all ages by these hoverboards, CPSC is urging the public to stop charging and stop using their LayZ Board. Consumers who choose to dispose of their hoverboards should take them to a local recycling center for safe handling of the lithium-ion battery. CPSC is also asking the public to share this warning with friends and family so that no one else is injured by them.

The CPSC was quick to specify that the stop-use warning only applies to LayZ Boards, but based on previous language and recalls, it is still aware of the risks associated with other brands.