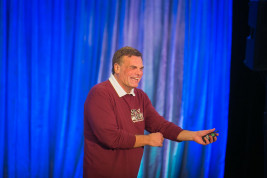 Crystal D announced last week that its founder and CEO, Chuck Dahlgren, sadly passed away on Oct. 10, from complications during heart surgery.

The company released the following obituary:

Our hearts are broken.

He was known as Chuck or Charlie. He was born in Olivia, MN, and grew up in Bird Island, MN. Chuck attended Concordia College and then farmed in Bird Island through 1982. In 1982, he enrolled in college again and obtained a degree in accounting in 1984, after which he became a CPA. He worked as an accountant and then as a chief of operations for a construction company before purchasing Ice Nine Glass Design in 1992. Ice Nine Glass Design was renamed to Crystal D, and it is where he made his impact on the world. His biggest accomplishments were found in his relationships with family, friends, coworkers, and employees that he called Memory Makers. Chuck was known for his passion for his work, drive and determination, love of learning, constant personal development, faith in Jesus, and love of family and the lake.

He is survived by many. Jeanne Dahlgren, his beloved wife; three daughters; and many grandchildren: Audra and Matthew Lehnert, and their children, Nolan, Ryan, Ruby, and Grace; Bridget Dahlgren and her daughter, Madison; Crystal and Garrett Hoelzel, and their children, Olivia, Boaz, Viviana, Simeon, and Malachi. His siblings: Suzi and John Nelson, Rick and Margaret Dahlgren, Patti and Ron Peterson, Nancy Jurgensen, Kathy and Tom Krantz, and Gretchen and Howard Anderson; along with dozens of nieces and nephews.

If you’d like to send condolences to the Crystal D Memory Makers and/or Chuck’s family, please use one of these options: