Why Cubs Fans Waited Hours in the Rain for a Bobblehead 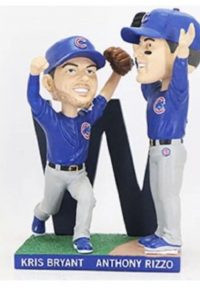 When a franchise’s fans endure an agonizing period between championships, one might expect that waiting an additional two months for an item that commemorates the conclusion of the undesired delay would cause no concern. Well, when the backers are pledging their support to the Chicago Cubs, no such assumptions should occur. Yesterday, frustrated aficionados flocked to Wrigley Field to try to secure a bobblehead that depicts stars Kris Bryant and Anthony Rizzo celebrating the final out of last year’s World Series, a seven-game thriller that brought the Windy City diamond dwellers the club’s first crown in 108 years.

The giveaway would have occurred May 20, yet Mother Nature put a damper on that, with heavy rains, which many eager would-be attendees tolerated for hours, leading to the aforementioned rescheduling. While many Major League Baseball bobbleheads have aimed for novelty, this promotion sought simply to capture sheer jubilation, especially since the Cubs had rallied from a 301 series deficit against the Cleveland Indians and because anyone with even an inkling of knowledge of the organization’s history (the Curse of the Billy Goat, the historic 1969 division collapse and the Steve Bartman incident come to mind) realizes just how long the zealots have suffered. Through the homage to Bryant and Rizzo, the organization drew fans as early as 6 a.m., yet, of course, the demand was greater than the supply, meaning that the world of online purchases will definitely soon feature some exorbitant asking prices.

Right after the Cubs claimed the title in November, many pundits pondered whether they could establish a dynasty, but the heroes have slumped this year. Following yesterday’s 11-2 loss to the National League Central division-leading Milwaukee Brewers, the team, which will send only closer Wade Davis to Tuesday’s All-Star Game, is a disappointing 42-43. Considering that last year’s bunch went 103-58, nobody is foreseeing another triple-digit victories campaign from the Cubbies.

While the artistic representations of Bryant and Rizzo would nod their noggins to suggestions that the Joe Maddon-led club could make a solid second-half run, perhaps the Cubs are on the unfortunate road to reclaiming their formerly perennial status as loveable losers. We here in Philadelphia can be guilty of Schadenfreude and fond of quoting Shakespeare (seriously, there are some of us who do!), so maybe we will be rooting for the Cubs to prove that uneasy lies the head that wears a crown.