That's the semi-official mantra for the Chicago Cubs this year. Taken from something Cubs manager Joe Maddon told Cubs infielder Javier Baez when the team called up Baez from the minors, the team printed the message (along with Maddon's trademark, thick-rimmed glasses) on a T-shirt to benefit Maddon's Respect 90 Foundation. Before, fans weren't allowed to wear shirts that said "suck" into St. Louis' Busch Stadium. But now, thanks to the popularity of the shirt, the Cardinals likely will bend the rules a little.

According to STL Today, ushers at Busch Stadium told fans wearing the Cubs shirt that they had to remove them before coming in. After a conversation on Wednesday, it looks like the Cardinals will let Cubs fans wear them during the next series. 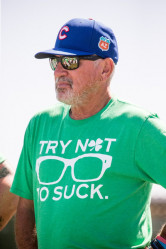 The St. Louis Cardinals are considering changing their stadium rules to allow the Cubs' "Try not to suck" T-shirts. (Image via Korked Baseball)

"I find it humorous, actually," Maddon said to STL Today. "I'd love to know the definition of why they're offensive in any way, shape or form. I'd love a full explanation as to why they find it offensive. And I said if you do find it offensive, you really have to dig down deeply and understand why that you find that dirty in some way. I don't find it that way at all."

The Cardinals have an outline of expectations for visitors to the park in its "Ground Rules for Guests." One of the rules forbids obscene or indecent clothing, including anything that says "sucks."

"The first day we came in town, I went to Hooters for some wings and some beer, and a guy came in with a shirt on, a Cubs fan, and he told me he was denied access to the ballpark," Maddon said to STL Today. "So, I was debating all kinds of methods to combat all that. But then I decided to let it fly. And I think the fans are responding. That's the best way to indicate how foolish it is."

Maddon added that he considered wearing the T-shirt during batting practice out of protest and solidarity with his team, but ultimately decided against it.

It isn't the only "Maddonism" that the Cubs have immortalized on clothing. Cubs players also have walked around the clubhouse (can we call it the "Cubhouse," please?) in shirts that said, "Do simple better" and "Embrace the target."

What do you think? Are the "Try not to suck" shirts offensive? Are the Cardinals overreacting by barring people from entering if they're wearing them? Let us know!