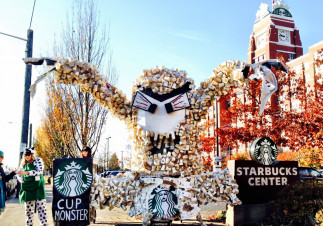 Starbucks has been the target of Stand.earth's cup monster, Grounds, both at a summit and outside its headquarters. (Image via Twitter)

An inspection of Starbucks's recent annual financials would lead one to believe that October, which commences its fiscal year, figures to start yet another immensely successful stretch. As we say farewell to the month, though, the company’s bigwigs, who have brewed up zombie and “IT” Frappuccino offerings for the march to Halloween, have found themselves spooked a couple times over the last 31 days, with two entities looking to push the company to adopt more sustainable business procedures.

Stand.earth, which, like the coffee company, is based in Washington, made the more recent attempt, enlisting a cup monster dubbed "Grounds" three weeks ago during the GeekWire Summit. The towering prop, consisting of more than 500 used Starbucks coffee cups, served as a unique way to have CEO Kevin Johnson and his Seattle-situated colleagues realize the need for more sustainable holders. The beverage provider has long found itself engaged in the pursuit of pleasing not only the taste buds of its customers, but also their calls for containers that will not negatively affect the planet, and has looked to meet those pleas in earnest. Groups like Stand.earth, through its Better Cup campaign, have likewise advocated for better practices, with the fact that more than 8,000 Starbucks cups end up in landfills every minute being a prime point in their platforms.

Johnson, who assumed his position in April, has also needed to address gripes from As You Sow, a socially conscious foundation whose outreach to Starbucks has similarly called for greater use of reusable cups and the discontinuation of plastic straws. The combination of qualms proves a compelling reminder that Americans are unabashedly intense consumers of coffee, with the love affair playing a huge factor in our using 48 billion disposable cups annually. While Starbucks, because of its aforementioned success, is the undeniable go-to establishment and the go-after target for sustainability supporters, other sellers have the same responsibility to be cognizant of their contributions to our battle against pollution.

Going back to the mention of how end-users now often desire quality goods, and assurance that the manufacturing and marketing of them does minimal or no damage to the Earth, one could see those demands for transparency (and the likelihood that not all huge corporations will heed them) as an opening for promotional products industry movers and shakers. If reading about this matter and the whole issue of single-use cup fees, for example, has the words “branded drinkware” falling from your lips, you could be ready to stand out even more as a trusted presence in the field. As Promo Marketing noted seven months ago today, requests for more practical means to peddle coffee could be a big boon to you and your contemporaries, and could help you make sales pitches that lead clients to refill not only their cups, but also their order forms.

Make Your New Hire a Success