I have never enjoyed mincing words, so, having endured their futility, I am going to say that before this season, the now 51-30 Philadelphia 76ers served as the undisputed athletic example of hot garbage. With only 75 total wins in the four campaigns prior to this one, they never finished fewer than 25 games out of first place in the Atlantic Division and epitomized the patience (often excessively) that fan bases need to exert during rebuilds through the “Trust the Process” mantra.

Well, that perseverance has paid off for the supporters, as the hoopsters are heading to the playoffs for the first time since 2012, with star guard Ben Simmons a huge factor in their rejuvenation. The 21-year-old has produced statistics that could lead to his winning the Rookie of the Year Award, but another fresh face in the league, Utah Jazz sniper Donovan Mitchell, poked fun at the Philly-based baller’s status as a first-year contributor, donning a hoodie bearing the definition of a rookie. 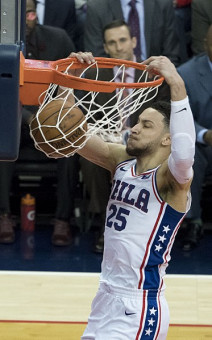 The Philadelphia 76ers have returned to prominence thanks in large part to rookie guard Ben Simmons. | Credit: Wikimedia Commons

Mitchell wore the not-so-subtle means to promote his own candidacy last night ahead of his club’s 119-79 humiliation of the reigning league champions, the Golden State Warriors. Noting that a rookie is “an athlete playing his or her first season as a member of a professional sports team,” the Adidas-issued garment also serves as a visual aid in questioning whether Simmons should even merit consideration for the honor, given that the flashy left-hander joined the league as part of the 2016 draft class. Since a foot injury sidelined him for the entire 82-game slate, the league classifies Simmons as a rookie, meaning he is just as green as those who tipped off their professional careers last fall. That did not stop Adidas from customizing the hoodie for Mitchell, who, during the bloodbath against the Warriors, set the rookie record for most made-three-pointers (186), and whose club will also seek a solid postseason journey.

USA Today relayed that the University of Louisville product kept Utah’s cold weather at bay just to engage in a bit of levity, with Mitchell stating, “I’m blessed to be in this spot, [to] continue to be in this consideration. Why not have fun with it as well?” He added, “It’s great to be in the conversation like that, but at the same time, I’m cool with where we are as a team.”

Ummmm 😂
Donovan Mitchell stirring the pot in the ROY debate, via @utahjazz pic.twitter.com/ZQ5oaobnyd

Where each club resides in the standings could very well seal the deal for voters. Mitchell’s Jazz have taken some lumps this decade, yes, but they won 51 games last year and advanced to the Western Conference semifinals. This season, they stand at 48-33 and have won six in a row, giving them the league’s second-longest current winning streak. The pacesetters in that department are, you guessed it, the 76ers, who will look to down the Milwaukee Bucks tonight in South Philly for their 16th-straight win.

Let’s look at the latter run for a moment. Two years ago, when Simmons played his lone season at Louisiana State University, his future squad won a whopping 10 games. It rebounded last year to hit 28 victories, but this campaign has amazed many, as the team, long a doormat, could be the Eastern Conference’s third-seeded playoff participant. Without Simmons, who has registered the second-most triple doubles by a rookie in league history, where would the 76ers be? Despite a strong team that includes fellow dynamo Joel Embiid, I would say they would be clearing out their lockers and planning vacations after tonight’s tilt. This now concludes by unabashed case for Simmons to win Rookie of the Year.

Mitchell’s wardrobe selection, though, is definitely not lacking in originality, and it is likely that he will walk away as the runner-up for the newbie prize. A month since Bucks superstar Giannis Antetokounmpo reminded us that it’s not that classy to rib an opponent, the Jazz standout’s gesture reminds us that throwing shade is as ubiquitous among league constituents as making clutch shots and chasing records are. Mitchell joined impressive company in calling upon the hoodie to roast a contemporary, as Cleveland Cavaliers legend LeBron James wore “I’m King” shoes Monday to poke fun at Enes Kanter and the New York Knicks.

In other words, just in time for the postseason, the NBA’s stars are proving that their fashion senses can prove comparable to their preparation to chase championships. That, everyone, is good news for promotional products peddlers and fans who have long benefited from goods that decry the competition. Welcome to the playoffs, folks!