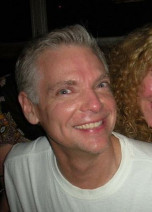 Thomas S. Kennerly III, 54, of Camp Hill, Pa., passed away unexpectedly on Friday, Jan. 29, 2016 in his residence. He was a business consultant with Customer Focus, Costa Mesa, Calif., and a graduate of Penn State Harrisburg and Northern Illinois University, where he earned his MBA.

Kennerly was born in Philadelphia to Thomas and Edith (Epple) Kennerly Jr. of Camp Hill. In addition to his parents, he was a beloved brother to David Kennerly of Elizabethville, Pa.. Karine Lewis (nee Kennerly) of Etters, Pa., and Mark Kennerly of New Cumberland, Pa., and the uncle of Drew, Payton, Jackson, Tyler and Zoe.

Being a movie buff, Kennerly moved to California, where he was an extra in three movies. He also had written and directed two movies, which he made in Pennsylvania. The first movie he produced was called “The Two Roomer.” He also was a member of the Screen Actors Guild. He loved to imitate various movie stars and comedians. Kennerly was a character. He held many jobs—philanthropist, bartender, salesman, teacher, airline steward and actor.

"Tom was well-known for his charisma, sense of humor and passion for acting and films," said Martin Varley, CEO of Customer Focus. "And, during his time with Customer Focus, his dedication and commitment quickly became an integral part of our recent success and growth."

Kennerly wrote a book, called "How to Make $1,000,000 in Sales Your First Year," and had it published. He also was an avid fan of the Baltimore and Indianapolis Colts.

A memorial service will be held at 11 a.m. on Feb. 6, 2016 at West Shore Baptist Church in Camp Hill, Pa., with the Pastor Gary Bruland officiating. Visitation will be one hour prior to service time in the church.

In lieu of flowers, memorial contributions respectfully are requested to be sent to West Shore Baptist Church, located at 2025 Market St., Camp hill, PA 17011, in honor of Kennerly.