Cutting Edge: The Difference Between a Successful Tech Promotion and a Dud

As the immortal philosophers known as Reel Big Fish said, “It’s not so bad being trendy.” The band was talking about ska music, of course. But we can still apply that same advice to the always-evolving technology trends of the 2020s, especially when it comes to the promotional products industry.

What Reel Big Fish neglected to include in their prophecy was that it’s not so bad being trendy—within reason. When you’re working with tech items in promo, you can’t just chase every shiny thing that makes a momentary splash on the internet. A lot of tech items are expensive, so you’d be putting your customers in a bad spot if they bought a product no one wants by the time people receive it.

As we know, the retail space serves as a great influencer for what will be popular in promo. There are also a few companies that people pay attention to in both promo and retail. The biggest one? Apple. At least, according to Tommy Leung, director of product development at Spector & Co., West Chazy, N.Y., some technology doesn’t really take off until Apple adopts it, even if others have been using it for years.

“There are a couple of different phone companies that are very popular in Asia,” he said. “A lot of new technology is getting started in Asia, for example [Near Field Communication (NFC)] and the wireless charging scanner built into the phone. These two technologies have been very popular for years. It was never popular in North America because of Apple.”

He said that Apple has such influence on the North American tech market that, even when big-name companies like Samsung or other Android smartphone manufacturers introduce something, it doesn’t seem to fully become mainstream or widespread until it’s utilized in an Apple product.

These ideas were already implemented, though. Leung recalls a trip he took years ago to Japan, where he noticed that the airport shuttle used NFC technology. Samsung was using it, too. But until Apple introduced Apple Pay, it existed on the fringes of technology.

Spotting the trend, however, Spector started implementing NFC technology into its imprinting methods so end-buyer customers could do things like direct end-users to webpages with the swipe of a smartphone.

“Let’s say there’s a new launch that an end-user wants to show their client,” he said. “They just put it into their website and get the link and upload to the NFC tap [technology]. The tap will bring the phone to a  web page that the end-user wants the client to see.”

Watch What Flies Off the Shelves

Apple isn’t the only powerful tastemaker in tech. Yes, Steve Jobs changed the landscape of technology and, importantly, the aesthetics of technology forever. But the conversation doesn’t start and end in Palo Alto.

Look at other consumer technology trends that have been big recently. In addition to the wireless chargers that Leung talked about, items like Bluetooth speakers and wireless headphones are becoming more advanced by the day. Right now, Leung said you should be paying attention to what’s called True Wireless Technology, or TWS for short. This is a wireless audio setup that outputs stereo sound, rather than mono from just one speaker. The two components, whether they’re Bluetooth speakers or earbuds, communicate with one another and the audio source, which is typically a smartphone device.

And as technology has permeated much more than just our cellphones and our music, new categories of “computers and technology” begin to emerge. Believe it or not, that includes drinkware.

You might be familiar with the brand Ember. Ember makes coffee mugs that use technology to stay at a precise temperature. After hitting the retail market (coincidentally landing its products in Apple stores in the U.S.), Ember has explored the possibilities of corporate gifting and promo.

“This sales channel was started out of pure demand,” said Ian Johnson, account executive for Ember. “Being an [Internet of Things] retail-focused company, we knew very little about the promotional products industry in 2018. However, we began to receive dozens of emails from boutique promotional companies with a lot of ‘my client loves this and asked if you sell to promo’ [messages.]”

Johnson said that in Ember’s time in the promotional products space, the company has taken note of what distributors are looking for in tech items for their clients.

“From our research, we have understood that many distributors are beginning to see higher demand from their clients for ‘retail, brand or retail-inspired’ promotional products,” Johnson said. “Our product being a convergence of tech and drinkware with a retail footprint makes a great fit for the promotional industry. The gifting nature of our product makes it want to be shared with others and creates a talking point forever.” 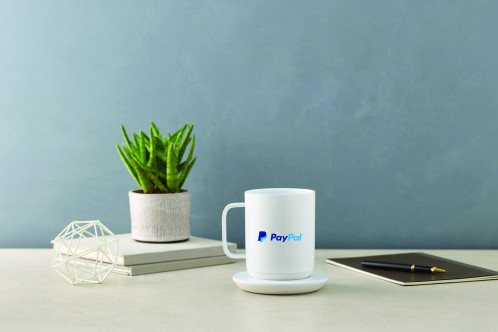 The point is, when customers come asking for tech products, there are more answers to give than just smartphone chargers, headphones or fitness trackers. Those are always going to work, and they’re always going to be necessary, but it helps to have some different options to suggest that show you have a finger on the pulse of what’s coming and what’s cool.

Don't Fall for the Flash in the Pan

But not all trends have staying power. Remember Betamax? Google Glass? HD DVD? Those were all highly touted as the “next big thing,” and even if their actual technological specs were robust, they didn’t quite find mainstream success for long. Everyone has their 15 minutes, after all.

Items like VR goggles have the cool factor, but distributors need to be discerning when they choose what tech products to put a lot of stock in. “We did launch a VR goggle as well,” Leung recalled. “In the first year, it did very [well], but in the second year, [sales] went away. The sales dropped, so we took it off of the shelf.”

And things like drones are still popular, but some items might yield diminishing returns. And if you buy them too late into their hype cycle, you might have a lot of leftover stock. With things moving as fast as they do in the Internet Age, what’s cool yesterday becomes lame tomorrow.

“It’s good that we follow the trends, but we shouldn’t follow so close,” Leung said. “Something like the fidget spinner. The fidget spinner isn’t tech, but for example it was something very trendy. It lasted three to six months, and before or right after your inventory arrives, the trend is finished.”