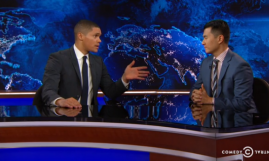 Last week, we reported on the Sacramento Kings T-shirt controversy that resulted from their Year of the Monkey Chinese Lunar New Year T-shirt giveaway. DeMarcus Cousins felt that it was insensitive to release the T-shirt to fans on the first day of Black History Month, and the team pulled the T-shirt at the last minute.

Now, "The Daily Show" is responding to the controversy with its own take, featuring correspondent Ronny Chieng.

The over-the-top segment clearly tries to be borderline offensive, questioning why we should listen to Cousins, the "leader in technical fouls for, like, five seasons in a row," and pointing out that the Chinese tradition of choosing animals for each Lunar New Year dates back thousands of years and is based on the moon.

Check out the segment below: