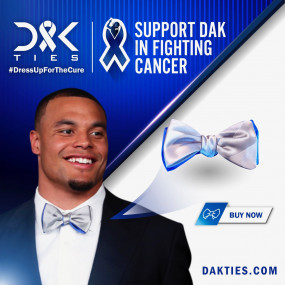 In many ways, I am a typical Philadelphia sports fan in that I nurture disdain for most of our teams’ division rivals past and present, with the Pittsburgh Penguins and New York Mets earning an extra special degree of disgust. The Dallas Cowboys, though, stand out as a notable exception (I find it much more fun to root for the New York Giants and Washington Redskins to lose), and, dare I say, I have even come to admire a few of their players, particularly second-year quarterback Dak Prescott. While his gridiron feats have many fans and observers deeming him destined for elite status, one could contend the 24-year-old has already achieved greater distinction, that of a crusader against cancer. Through Lombardo Custom Apparel, he is marketing an eponymous collection of bow ties, with sales from the accessories generating funds to counter the malady that claimed his mother four years ago.

Cufflinks join the cloth items in helping supporters not only emulate the signal caller’s lauded fashion sense but also play a part in eradicating the nation’s second-leading cause of death. Prescott parted with his matriarch in November 2013, losing her to colon cancer. In her absence, he gained quite a name for himself among pigskin pundits as a Mississippi State University Bulldog, earning a pair of First-Team All-Southeastern Conference selections. His skillset led the Cowboys to select him in the fourth-round of last year’s draft, and he adjusted well to the pro game, winning the Associated Press NFL Offensive Rookie of the Year honor and faring very well in merchandise sales. While it will be interesting to see how his 4-3 club’s year unfolds, especially with two matchups against the NFC East Division-leading Eagles to come, many people will also be cheering for proceeds from the $65 ties to bring in ample financial resources for the medical community.

There can be no denying that bow ties enable end-users to piece together an interesting appearance, with prominent wearers, real and imagined, giving the products a chance to fight back against negative perceptions surrounding their very existence. With regards to Prescott, famous for donning his ties after he leads “America’s Team” in action, yes, the garments will likely help him score consideration for inclusion in a few best-dressed lists, but the promotion of them through dakties.com will be a better boon in that he is commending his mom’s influence and looking to contribute to the addressing of a problem that needs solving far more than any defensive strategy he faces while under center.