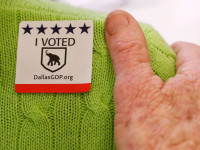 A GOP-themed sticker; Image via The Dallas Morning News

On election day, whether it's for general or primary elections, people usually see plenty of "I voted" stickers on jackets and lapels. However, they usually don't indicate how people voted. That's not the case this year in Dallas County, Texas, as voters found "I voted" stickers specific to political parties.

According to The Dallas Morning News, neutral "I voted" stickers were hard to find this year, and the local Republican and Democratic parties provided party-specific stickers for voters who wanted to, literally, wear their politics on their sleeves.

Dallas County Republican Party Chairman Wade Emmert told The Dallas Morning News that the Republican Party decided to make party stickers after receiving permission from the secretary of state. He added that the stickers would only be used for the primary, since are voting in a specific party's election rather than for any candidate they want.

"The community came to the consensus that they wanted the donkey stickers," she told The Dallas Morning News. "So far, they're a huge hit, and we're having to deliver more stickers."

While the two political parties enjoyed seeing their respective voters show up to the ballots, some Texas voters were less excited to make their political leanings public.

"I like people just knowing I did vote," Brandon Sims, a Dallas voter, told The Dallas Morning News.

She added that if people were concerned about showing their party affiliation, they didn't have to wear the stickers.